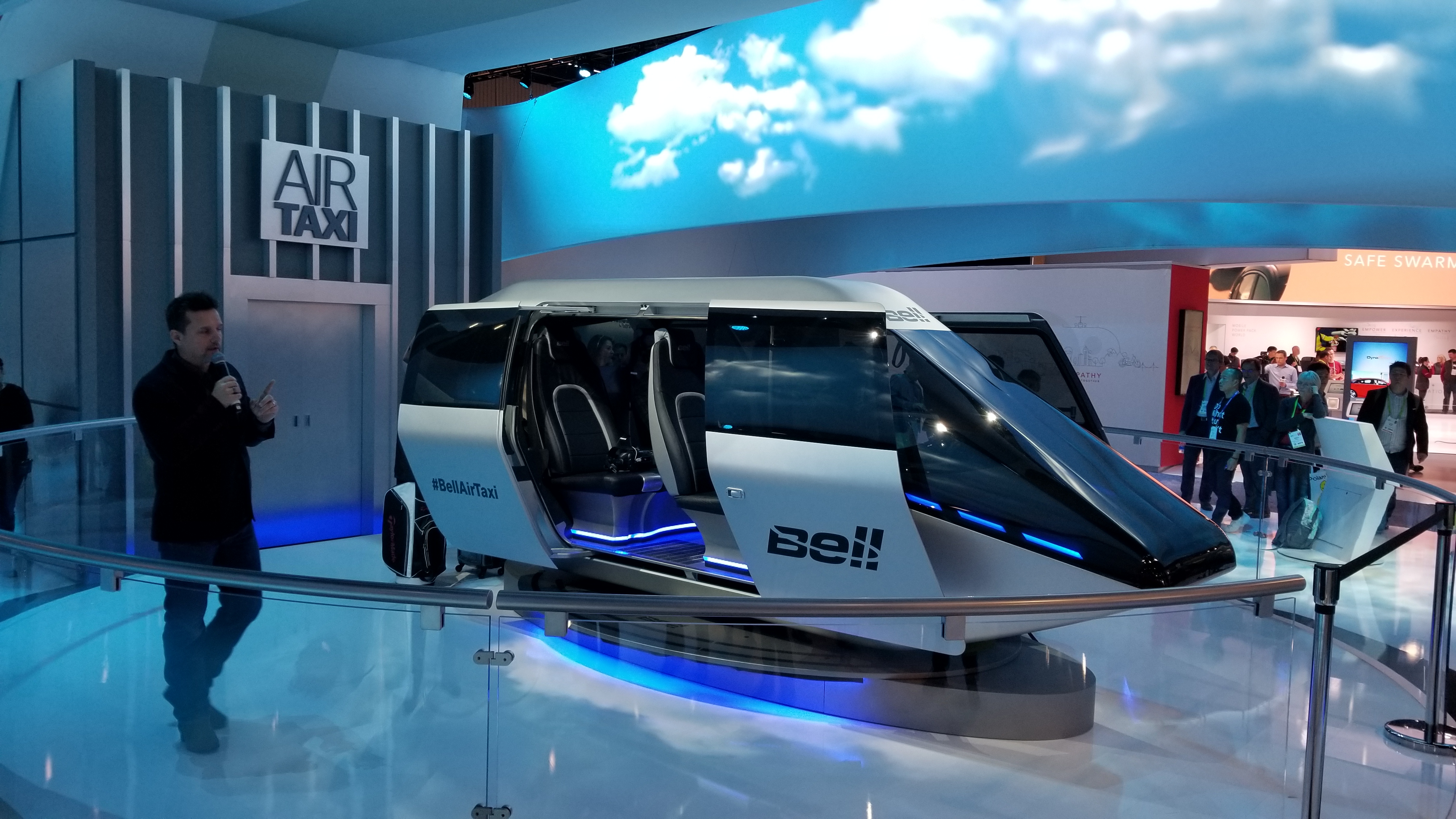 Aviation Comes to the Consumer at CES 2018

Well over 170,000 attendees from 150 countries visited some of the nearly 4,000 exhibitors showcasing technologies, spanning more than 2.75 million ft² (255,000 m²) of exhibit space, the largest in CES history. There were more than two dozen themed exhibit areas on topics such as 3D printing, internet of things infrastructure, self-driving technology and drones. Even NASA exhibited at CES with a sizeable booth explaining the benefits of its aeronautics and astronautics missions.

Drone maker EHang brought CES to the attention of the aviation world with the debut of its single-seat EHang 184 passenger-carrying octocopter in January 2016, and displayed it again in 2017 (though not this time).

Bell Helicopter made its debut this year as the first major helicopter manufacturer to exhibit at CES. The company reported that more than 7,000 attendees, journalists and VIPs put on virtual reality headsets and experienced the Bell Air Taxi virtual concept, with thousands more just visiting the Bell booth.

The future of urban air taxi is closer than many people realize,” stated Bell Helicopter’s president and CEO Mitch Snyder. “We believe in the positive impact our design will have on addressing transportation concerns in cities worldwide.”

The Bell Air Taxi augmented-reality simulator offered a selection of cross-city day and night trips as possible consumer scenarios. The experience highlighted the opportunities in immersing passengers with the ability to sync into a “fully integrated user experience control center, where they can catch up on world news, hold a video conference call, share documents with other passengers or simply unplug from the noisy world below in a comfortable, relaxing space.”

Bell refused to make any comments about the propulsion system, though past graphics suggest that Bell is considering multiple tilting ducted rotors or propellers. Bell Director of Innovation Scott Drennan did acknowledge that the Bell Air Taxi would use hybrid-electric power initially and for longer-range applications, but eventually would be powered solely by batteries once that technology advanced sufficiently.

Bell chose CES to unveil the fuselage and passenger experience of its eVTOL air taxi — which it is developing in partnership with Uber’s Elevate initiative — to gain feedback from potential riders. “The four-passenger cabin demonstrates Bell’s view of an on-demand mobility aircraft that focuses on a people-first engineered user experience tailored with an urban air taxi ride,” Bell announced.

Cincinnati, Ohio-based Workhorse Group, a technology transportation company known for its electric-powered delivery and utility vehicles, announced in December that it planned to spin off its aviation division into its own publicly traded company. The new company, SureFly Inc., is named after the Workhorse SureFly hybrid-electric VTOL aircraft that was unveiled last Spring for the Paris Air Show (see “Innovation in the Parisian Summer: Paris Air Show 2017 Report,” Vertiflite, Sept/Oct 2017).

At the time of its unveiling, Stephen Burns, CEO of Workhorse, stated, “We’ve designed SureFly by leveraging our expertise in battery-electric powered mobility, controls and gas generators to accelerate the speed to market in this sector.”

The company announced on Jan. 3 that it had received an Experimental Airworthiness Certificate from the US Federal Aviation Administration (FAA) that will allow the company to conduct manned test flights. Workhorse had planned to make the first manned, untethered flight of the SureFly at noon on Jan. 8, just prior to the opening of CES 2018. But, as the company explained in a tweet, “117 days of sun shine in Vegas ended today. SureFly manned flight is postponed.”

The Workhorse display in the outdoor CES Central Plaza featured the company’s electric trucks and the hybrid-electric SureFly, which the company refers to as “the world’s first electric hybrid helicopter.” The aircraft features a drone-like octocopter design, with four arms, each with two electric motors driving fixed-pitch counter-rotating propellers; a hybrid propulsion system combining gasoline — a BMW i3 engine — and electric power; and a backup lithium battery pack to drive the electric motors in the event of engine failure (plus an emergency backup ballistic parachute).

The aircraft can carry two people or up to a 400 lb (180 kg) payload to a range of approximately 70 statute miles (110 km). Early models will be pilot-operated — the cabin currently features joystick controls. The company’s goal is to introduce future, autonomous models capable of carrying payloads of up to the full 400 lb.

Volocopter (originally known as “e-volo”) has been flight-testing eVTOL aircraft longer than any of the more than 50 eVTOL companies. The original VC1 was a pilot sitting on a yoga ball surrounded by swarm of electric propellers in October 2011. The two-seat VC200 made its first unmanned flight in November 2013, followed by the first manned flight on March 30, 2016. The 18-propeller VC200 has now made more than 500 flights (nearly all unmanned), including demonstrations for the Roads and Transport Authority in Dubai this past fall.

In August 2017, Volocopter received an additional $30M investment from Daimler, Intel and others; Intel had also purchased a previous investor, Ascending Technologies. Intel also highlights that Volocopter uses its Intel Flight Control Technology, which is based on the intelligence found in the Intel Falcon 8+ drone used for inspection, surveying and mapping. The aircraft can be flown autonomously, remotely or with a joystick.

As part of the Intel CES keynote by its CEO Brian Krzanich, the VC200 was flown inside a packed auditorium, lifting off and hovering (tethered and behind a protective screen) across the stage of the Park Theater at the Monte Carlo Hotel. Krzanich also revealed a video in which he flew in the VC200 near Munch, Germany, on Dec. 3, claiming to be the world’s first eVTOL passenger in a remotely operated flight.

At CES, Volocopter displayed one of its pre-production models, the 2X, which has a more refined cabin (with doors), a raised and more streamlined rotor structure, and much better performance — up to 30 minutes of flight time. This was the first public showing of the 2X, at least one of which is believed to have flown last year.

Just as CES has evolved from being focused on consumer electronics to embracing superordinate technologies such as transportation and smart cities, so too is vertical flight being transformed from a capability accessible only to wealthy owners and passengers to one that serves the average technology consumer. While eVTOL air taxis and personal air vehicles are still years away from certification and widespread operations, aviation and the consumer are likely to enjoy a much closer and mutually beneficial relationship in the future.

For more on these electric VTOL aircraft, check out their pages on www.eVTOL.news. For more AHS photos from CES 2018, go to https://gallery.vtol.org.