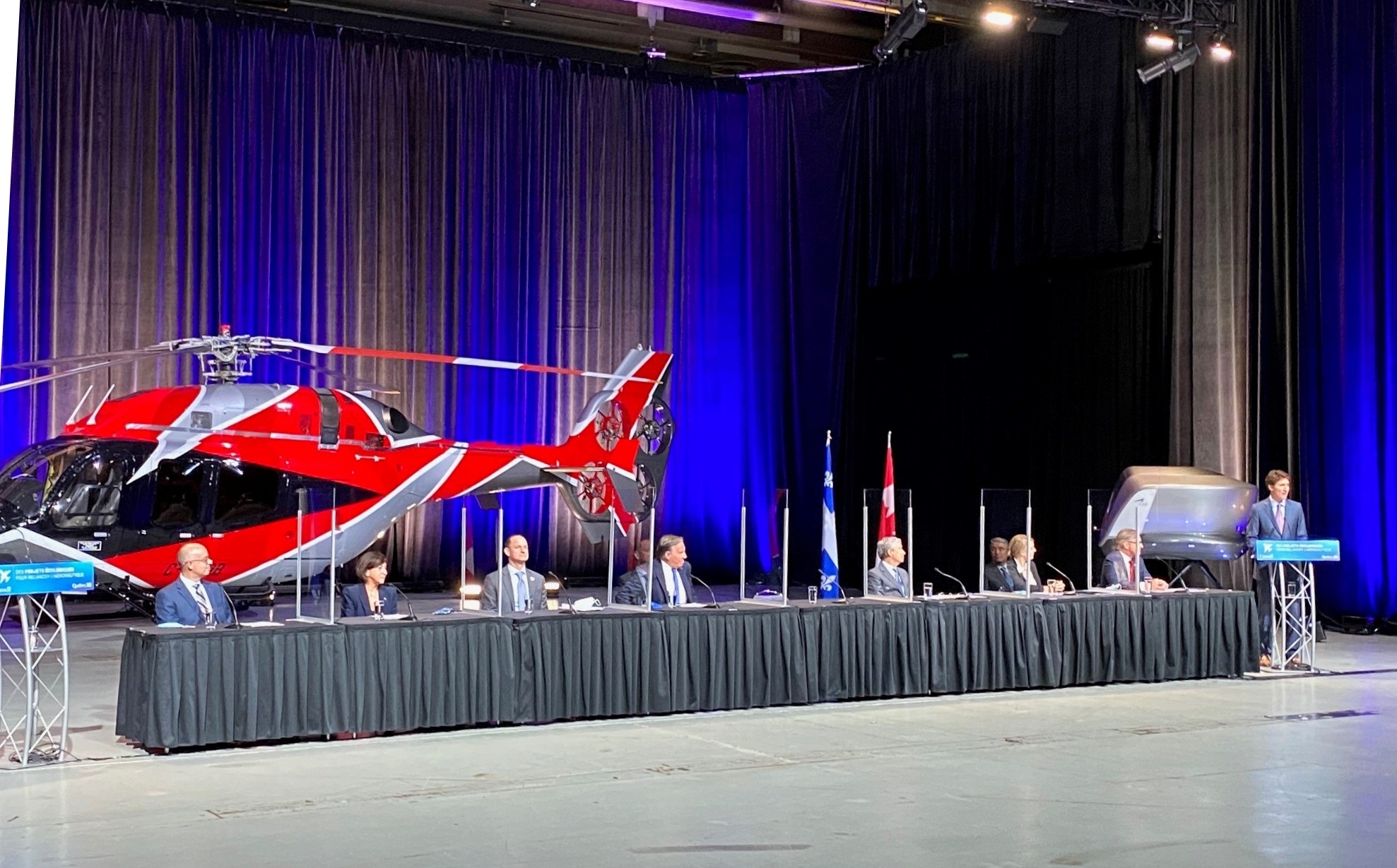 By Kenneth I. Swartz
Vertiflite, September/October 2021

Seated in front of Bell’s Model 429 Electrically Distributed Anti-Torque (EDAT) technology demonstrator, the politicians announced they would provide up to C$685M (about US$550M) in support to CAE, Pratt & Whitney Canada (P&WC) and Bell Textron Canada.

CAE and P&WC issued press releases the same day highlighting how they would use the funds to develop new technology and expand their businesses, while Bell has been more circumspect when it comes to revealing details regarding its previously unknown “Viridis” project.

Aerospace Cluster
The Montreal area is home to the world’s third largest aerospace cluster, including the headquarters of Bombardier Aerospace, CAE and P&WCP&WC, plus all of Bell’s commercial helicopter family except the new Model 525 Relentless.

The last few years have seen aerospace production and exports negatively impacted by Bombardier Aerospace’s financial problems, and then the global aviation downturn caused by the COVID-19 pandemic.

Struggling with debt, Bombardier gave Airbus a 50.01% stake in its CSeries commercial jet program in 2017 and sold its remaining stake in the rebranded Airbus A220 in early 2020. Following the sale of its Dash 8-400 turboprop line in Toronto to Longview Aviation and of its CRJ regional jet program to Mitsubishi Heavy Industries, the deal marked Bombardier’s exit from commercial aviation.

Sales in the Quebec aerospace industry in 2019 represented C$17.8B and grew at the exceptional rate of 15.9%, with Quebec sales representing 57% of those of the Canadian aerospace sector, according to the Aéro Montréal trade group.

The need to reinvigorate aerospace manufacturing and employment in Quebec has been evident for some time, but is now essential, Canadian aerospace associations are saying, since other countries have been more supportive of their aerospace industry during the pandemic.

Bell
The press release revealed support of “up to $200 million [Canadian dollars] in federal funding for Bell Textron Canada to support their Viridis (Latin for “green” and “growing”) project, which aims to develop and commercialize environmentally friendly aviation technology. The provincial government will provide $75 million in loans to support the project. This joint investment is valued at $825 million. It could create up to 320 jobs, and co-op placements for a total of 350 students.”

In a media statement, Steeve Lavoie, President, Bell Textron Canada, Ltd., said, "We are excited about what this investment could mean for greener aircraft designed, built, and certified in Canada.”

This was the first time the Viridis project has been mentioned by Bell. VFS requested more information from Bell on what the project would encompass, but the company declined to provide details beyond a written statement, saying that the “electrically distributed anti-torque system provide[s] a great example of the type of work we will be doing within Viridis… as well looking into reducing CO2 emissions and noise on environmentally friendly helicopter technology.”

It’s unclear if the funding will help Bell to develop an entirely new helicopter or electric vertical takeoff and landing (eVTOL) aircraft in Canada, or retrofit hybrid-electric propulsion or the EDAT system on to one of its existing helicopters to reduce operating costs, emissions and noise, or something different altogether.

In 2010, the Québec government launched its Greener Aircraft project commonly called SA²GE (Systèmes Aéronautiques d'Avant-Garde pour l'Environnement,” but also a bacronym for “Smart Affordable Green Efficient”), aimed at the collaborative development of innovative and more environmentally friendly technologies. In 2018, Bell received Phase 3 SA²GE funding for a project called “POUSSÉE” (for Propulsion for Safe, Quiet, Green and Efficient Urban Operations), which aimed to “develop and build propulsion system prototypes in order to improve the power output and increase energy efficiency while reducing weight and external noise generated comparatively with the current ones.”

The scope of the work focused on three main themes: propulsion systems' performance and efficiency improvement, the reduction of noise generated by these systems and the overall reduction of the weight of the propulsion elements.

In addition, a Bell-led consortium received C$49.5 million from the Canadian government in 2018 “to develop innovative technologies to be integrated into next generation helicopters, which can fly with or without a crew on board, and fully autonomous aerial systems.”

Since then, Bell Canada has tested a ducted fan for the Nexus eVTOL aircraft at the National Research Council of Canada (NRC) wind tunnel in Ottawa in 2018, developed the new Electrical Distributed Anti-Torque (EDAT) system, which first flew on a Bell 429 flight test aircraft in 2019, and test flew an alternate configuration of the Autonomous Pod Transport (APT) at Mirabel on Dec. 11, 2020, in collaboration with ARA Robotics (see Industry Briefs, Vertiflite, Jan/Feb 2021).

Bell is currently working on the Griffon Limited Life Extension program (GLLE), which will extend the life of the Royal Canadian Air Force’s 85 CH-146 Griffon helicopters (the Bell 412EP) for at least a decade. The company is also lobbying to have the Bell 429 selected to replace the RCAF’s current training helicopters (Bell JetRanger) and the CH-146 when the RCAF’s Future Aircrew Training (FAcT) Program contract is awarded in 2023.

CAE
The Government of Canada and the Government of Québec will provide CAE with a combined investment of C$340M over the next five years (C$190M from Canada and C$150M from Québec) to support CAE’s C$1B investment in “Project Resilience, a transformation project to develop the technologies of tomorrow, including digitally immersive solutions using data ecosystems and artificial intelligence in civil aviation, defence & security and healthcare.”

As part of this initiative, CAE is positioning itself as a leader in end-to-end technology, operational support and training solutions for advanced air mobility (AAM), as well as develop green light aircraft technologies.

In an accompanying press release, Marc Parent, President and CEO of CAE, Inc., stated, “With advanced air mobility, we are on the cusp of a new era of aviation. Disruptive aerospace companies are building cutting edge aircraft and creating a new sector within the industry from the ground up. We are investing to position CAE to be one of the leaders in defining this emerging industry, supporting OEMs [original equipment manufacturers] with the development, testing and certification of aircraft programs, simulation equipment and the delivery of training to the next generation of pilots and maintenance technicians. It is expected that close to 60,000 uniquely trained professional pilots will be needed to safely fly passengers and cargo in these electric Vertical Take-off and Landing vehicles, and CAE has the expertise to help make it happen.”

CAE said it will harness its unique technological capabilities and long-standing expertise in supporting airworthiness test programs, as well as its latest innovations in simulation, virtual/mixed reality (VR/MR) and data analytics to serve the eVTOL aircraft industry.

On May 2, CAE was selected by Jaunt Air Mobility to lead the design and development of the Jaunt Aircraft Systems Integration Lab (JASIL) for the Jaunt Journey, which will be certified in Canada and is expected to enter service in 2027. (see "Jaunt's Journey," pg. 54).

As part of the agreement, CAE and Jaunt Air Mobility intend to build an engineering simulator that will accelerate cockpit design and system development, and will reduce the airworthiness flight-test time. The JASIL program is designed to de-risk the aircraft program’s schedule and manage development costs by identifying integration issues and proving failure modes early in the program.

On July 8, Volocopter announced it was teaming with CAE to develop an eVTOL pilot training program in preparation for Volocopter's entry-into-service in time for the 2024 Olympics in Paris. CAE expects to invest up to US$40M to meet Volocopter’s projected pilot demand in the early years of operation. (see “CAE and Volocopter to Create Global eVTOL Pilot Training Program,” pg. 46).

As part of the agreement, Volocopter will purchase a simulator from CAE to be used in its pilot training program certification. CAE will create new, student-centric courseware, specifically designed for the pilots of the future as Volocopter’s courseware provider and will also offer pilot trainees customized resources that enable faster, more efficient pilot training.

The pilot training program is expected to leverage CAE’s advanced technologies such as artificial intelligence (AI) and VR/MR, as well as data analytics to meet regulatory and safety requirements.

In mid-July, CAE revealed its investment in electric aircraft technologies and solutions would include retrofitting its large fleet of light trainer aircraft to reduce its carbon footprint. CAE operates about 200 fixed-wing trainers at ab initio and commercial pilot schools in the US, Europe and Asia, as well as training aircraft to support for military customers such as the US Army at Fort Rucker.

On July 2, CAE concluded the acquisition of L3Harris Technologies’ Military Training business for US$1.05B. With this latest acquisition, CAE now employs more than 11,000 people globally at 160 sites and training locations in over 35 countries.

Pratt & Whitney Canada
At the press conference, it was also revealed that P&WC will receive C$49M from the Government of Canada and C$20.5M in loans from the Government of Quebec to support a C$163M project to develop all the technological components to design its first hybrid-electric propulsion demonstrator aircraft. A grant of C$8.3M had been previously awarded to support part of the development work under another funding program.

P&WC is collaborating with De Havilland Aircraft Canada in the development of a hybrid-electric propulsion system for regional aircraft that will represent the next-step change in efficiency for aircraft engines.

In April 2019, P&WC teamed up with Collins Aerospace (both units of Raytheon Technologies) to launch what was then known as “Project 804,” which referred to the distance in miles between the Canadian and US based teams.

“Pratt & Whitney Canada is proud to be part of Canada’s green recovery plan and to be collaborating with De Havilland Canada in the development of the hybrid-electric propulsion technology by utilizing a Dash 8-100 regional aircraft as our flying demonstrator,” said Maria Della Posta, President, P&WC. “Hybrid-electric technology holds considerable potential to drive the next step-change in efficiency for aircraft engines, while contributing to the development of the industry’s workforce, economic growth and innovation.”

In 2019, P&WC acquired a former US Airways Express Dash 8-100 to its fleet of flight test aircraft based at Mirabel airport, north of Montreal. Plans call for one of the Dash 8s 1.4-MW (1,900-hp) PW120 turboprops to be replaced by a parallel hybrid system consisting of a 1-MW (1,340-hp) gas turbine optimized for cruise efficiency and augmented by a similarly sized battery-powered electric motor to provide extra power for takeoff and climb.

In 2019, Collins announced it would be responsible for developing the electric propulsion and motor controller at its facilities in Rockford, Illinois, though work slowed in 2020 as a result of the coronavirus pandemic. The objective is to develop a parallel hybrid-electric engine system that can achieve at least a 30% reduction in fuel burn and CO2 emissions and a 20% reduction in airline operating and maintenance costs, compared to a modern regional turboprop airliner.

P&WC hasn’t revealed any details regarding the gas turbine engine it will use in the new hybrid-electric system, but PT6A-67 turboprop that powers the Pilatus PC-12 and Leonardo AW609 tiltrotor is in right power range. The larger and heavier PW100 family spans the 1,800 to 5,000 hp (1,340 to 3,730 kW) range.

More than 1,300 Dash 8s have been delivered since 1984, including 672 “classic” models (Dash 8-100/200/300) and 630 Dash 8-400s. P&WC sees the market for the hybrid system as including new clean sheet aircraft as well as older models. In February, DHC announced it was pausing Dash 8-400 production this summer because of a collapse of new orders during the pandemic.