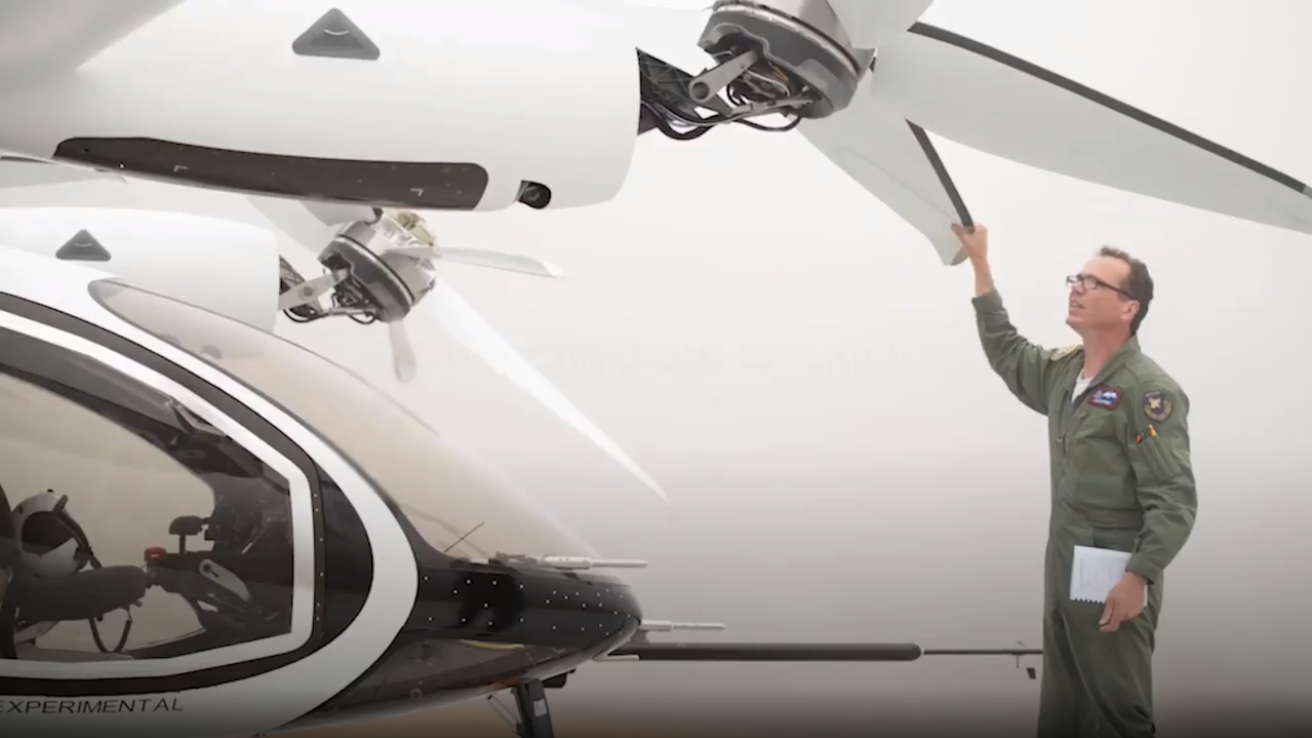 By Daniel I. Newman
Vertiflite November/December 2021

This series addresses the uses of terminology that drift toward becoming routine expressions or idioms — or already are — but are misleading or erroneous. This installment proposes a more rigorous approach to the terms for rotary-wing propulsors on vertical lift aircraft.

The term “rotor” is currently being used very loosely for any open (unducted) rotating vertical thrust device. Although most working in the rotorcraft industry would state confidently that “rotors have cyclic and collective pitch control,” there are exceptions that invalidate most definitions. There does not appear to be any authoritative reference for the terminology for rotating thrust devices for aviation or “propulsors.” Historically, this lack of a standard has not been a major issue for aviation, but the spate of new vertical flight configurations makes it necessary to bring consistency to the discussion. Proper labeling can immediately define the approach, neither misleading nor requiring additional text or queries. There is an appetite in the vertical flight community to have and enforce definitions, so while some may not comply, this article sets out the logic for use of the term “rotor.”

This discussion of open/unducted rotary-wing thrust devices differentiates between the terms rotor, fan, propeller and proprotor. All convert rotational energy (typically shaft torque) to fluid momentum as thrust or vice versa (e.g., windmills, gyroplanes and helicopters in autorotation). All use rotating wings or “blades” to generate a pressure change across their disk area for the conversion to/from thrust.

The terminology is not rigorous for fixed devices with a single dedicated function, and gets more confusing when they articulate and perform multiple functions (e.g. tilt for both lift and thrust). The nomenclature, though, should describe the uninstalled device design, and be independent of the purpose and installation to avoid renaming a device when used for differing purposes (despite using the same part number to reduce costs). So, whether tilting or fixed, for lift or thrust, the term for a device should be constant. And the naming should be based on the hardware and not the design intent. For naming an open rotary-wing device, the differentiating features are: the capability for off-axis control, provisions for edgewise flight and solidity (ratio of total blade area to disk area).

What’s a Rotor?
Historically — before the so-called “Electric VTOL Revolution,” when helicopters were the dominant configuration — all literature about vertical flight aircraft used the term “rotor” almost exclusively to refer to all open/unducted, fixed, horizontal, rotary-wing lift devices, such as helicopter and autogyro main rotors. Conventional helicopter main rotors are used for vertical thrust, control and forward thrust. They use blade pitch-angle control to provide both collective blade variation (to vary thrust) and cyclic blade pitch variation (to control flapping and hub moments). The rotors generally operate at a relatively constant rotation speed (measured in revolutions per minute, rpm), as they are large and thus difficult to accelerate quickly, and have rpm resonance frequencies that must be avoided.

Propellers, on the other hand, are devices that have historically provided forward/horizontal thrust in axial-only flow along the aircraft longitudinal axis. As they are smaller and often directly driven by a power plant, they may use variable rpm for thrust control as an alternative to blade pitch. They only provide axial thrust (along the device rotation axis). Propellers have no accommodations for edgewise flight.

Similarly, “fans” are also axial-only, thrust-only propulsors, differing from propellers in having higher solidity (the ratio of total blade area to disk area) with a cross-over of 0.5 commonly used. Examples are the fans in turbofan engines and lift fans, such as used on the Ryan XV-5 and the Lockheed Martin F-35B. But, as stated, the orientation and purpose shouldn’t matter, so the axial-only, thrust-only should govern for naming propellers and fans, whether controlling through variable blade pitch or rpm.

Helicopter main “rotors” have typically been thrust and moment devices, using blade pitch variation, fixed on a vertical axis. However, the rotorcraft community and literature also refer to fixed, open anti-torque devices as tail “rotors.” As typically tied to the main rotor drive, they also operate at constant rpm with collective pitch to vary thrust. Unlike propellers and fans, they are configured for highspeed, edgewise flight, often with hinges for blade flapping.

So, what warrants the term “rotor?” Is it the cyclic control? Or the vertical orientation? Based on the helicopter tail “rotor,” it is neither. The distinguishing feature is that tail rotors have blade flapping to facilitate edgewise flight. Otherwise, it would be a tail propeller.

With the success of the tiltrotor, the combination “proprotor” became common parlance for these tilting, open thrust devices. They are sized as a compromise, balancing the high thrust (>1g) for vertical lift and control when pointed up, and the lower thrust (0.2g) for fixed-wing cruise when pointed forward. The “proprotor” for a tiltrotor (or a tail-sitter, etc.) is really just a special case of a “rotor.”

Vertical Lift Propellers Are Not Rotors
Now, the recent outbreak of advanced air mobility (AAM) aircraft configurations with multiple thrusters warrants rigor as the terminology used by the new members of the vertical flight community has not been consistent.

Multiple devices enable attitude control of the vehicle using only independent control of the thrust, avoiding the need for the complexities of cyclic blade control — swashplates, pitch links, scissors, bearings, etc. — and obviating the need for blade flapping. The lower inertia of these smaller devices can use rpm variation to avoid all rotating blade pitch controls. So, what shall we call the devices on these new multi-thruster aircraft? Shall we use the same name for fixed-pitch, rpm-controlled devices as we do for constant-rpm, pitch-controlled thrusters?

With the development of the quadcopter drone as a consumer product, the terms “quadrotor” and “multi-rotor” have gained popularity in the public eye, and have now begun to bleed into the manned aircraft vernacular, primarily by companies and individuals from outside the traditional rotorcraft industry.

However, the simple, variable-rpm thrusters and the constant-rpm, pitch-controlled thrusters devoid of provisions for edgewise flight are mechanically no different than airplane propellers, so they should be called propellers — regardless of installation.

The term “rotor” should be preserved for devices with cyclic blade control or flapping — or both — for edgewise flight.

What is a “Rotor”?
By Dr. Anubhav Datta, University of Maryland

British engineer Frederick W. Lanchester introduced the word “rotor” in his paper, “The Screw Propeller,” at a meeting of the Institution of Automobile Engineers in London on April 14, 1915.

British aerodynamicist Hermann Glauert used the term “airscrew” in his book, The Elements of Aerofoil and Airscrew Theory (Cambridge, 1926). He defined the following terms:

Thus, Glauert defined “propeller” and “fan,” but did not use the term “rotor.”

During the 1930s, NACA autogyro researchers widely adopted the term “rotor” (e.g. John B. Wheatley, Report No. 434, 1932). The NACA “Nomenclature of Aeronautics” (Report No. 474, 1934) officially defined the term: “rotor — the complete rotating portion of a rotary wing system.”

Igor Sikorsky, in his historic “The Helicopter Proposition,” written in 1939, used the word “rotor” in describing his machine: “On the main vertical shaft, there is mounted a single lifting rotor that supplies the whole lift to the aircraft and that includes means for lateral and longitudinal control” (see Harry Pember, The Story of the VS-300: The Aircraft that Launched an Industry, Igor I. Sikorsky Historical Archives, Inc., 2013). The association of the word “rotor” to lift and control can be traced back to this statement by Sikorsky. Also noteworthy is that he referred to the anti-torque device(s) as a variable pitch “propeller,” not a tail “rotor,” so his definition was consistent.

Al Gessow and Garry Myers, in the introduction of their classic 1952 textbook, Aerodynamics of the Helicopter, used the term “rotating-wing” and related it to a rotor for lift.

Wieslaw Stepniewski and C.N. Keys, in the introduction of their 1981 book, Rotary-Wing Aerodynamics, formally stated a “rotor” to be the commonly accepted name for a lifting airscrew, whereas “propeller” was more applicable to a forward propulsion thruster.

In edgewise-flight, a rotating-wing provides both lift and propulsion. Gessow and Myers provided authoritative guidance. In their chapter titled “Blade Motion and Rotor Control,” the two authors make a distinction between a “rigid propeller” and a rotating-wing that has “blade flapping” or “cyclic feathering,” associating the term “rotor” with the latter. They showed that “the two systems are fundamentally equivalent, differing only in the axis of reference.” Thus, one criterion should suffice, flapping or cyclic feathering. Because the first successful rotating-wing aircraft was of the flapping type, and because flapping has remained the fundamental blade motion of any rotating-wing with or without hinges, it is normally adopted as the principal qualifier.

To summarize then, a rotor is a lifting airscrew that has flapping motion.

There is a minimum condition to call a rotor a rotor: it will respond to edgewise flow with a flapping of the blades as explained in depth by Anubhav Datta. This was the rotorcraft world for decades until an exploding variety of drive system architectures appeared with the raise of eVTOL aircraft. And suddenly, many of them use the term rotor for something which in reality is a propeller. But where's the problem? There is none as long as these rigid propellers are used for vertical flight primarily. But as soon as forward cruise flight begins there will be edgewise flow. A rotor will "know" how to respond - it will start flapping. But what happens to a propeller not knowing how to flap? It will "feel" loads - oscillating bending moments and forces - at its blade roots generated by such asymmetric flow conditions. Will this cause problems? There is no general answer, of course, except that the rotorcraft research community has the skills and competences to investigate this in depth. I'm sure there is plenty of interesting research work ahead of us!

I know that writing an article takes a lot of labor hours and takes a lot of research. In addition, I know this article is a very important article for the vertical lift industry but I am confused by this article. So please do not be offended by my comment and please don't kill the messenger!

I have always called a helicopter's tail rotor, the tail rotor. Instead of saying, those are rotors. (Example. Even when the helicopter is not on, I would recommend that everyone stay away from that tail rotor).

In fact, doesn't Joby Aviation use tilt-props on its Joby S4 eVTOL Urban Air Mobility passenger aircraft because they can't be tilt-rotors, can they? For the Joby S4, they use TWO propellers that tilt using a linkage mechanism and on the same aircraft, they use FOUR propellers that tilt where the propeller and its entire motor nacelle tilts. Do you know the proper names for each of these types of tilting propellers?

And if you don't think that tilt-rotor or tilt-prop should be defined, in the real world, engineers, writers and vertical lift fanatics need easy to use laymen's terms when we are discussing rotor blades or propellers or any type of vertical lift thruster with each other.

I would also recommend to use a picture next to each thruster's definition.

As usual, Dan nicely encapsulated the rationale and boiled things down in a way that all can understand - and enforce - using this publication as a reference.