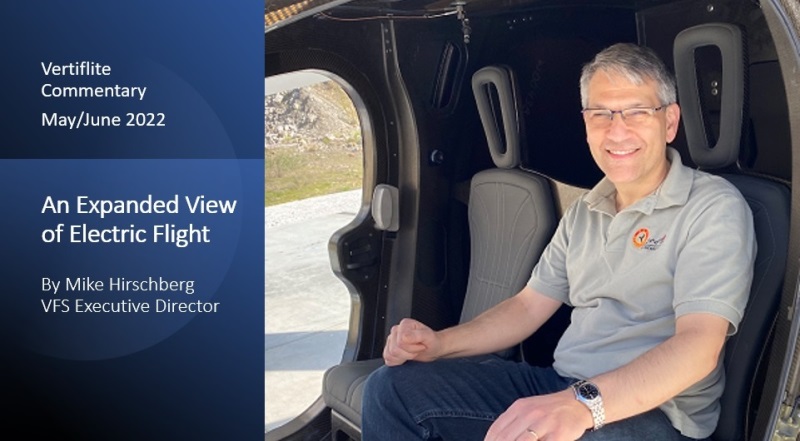 VFS supports key VTOL technologies applicable to all of aviation

Since our beginnings in 1943 as the American Helicopter Society, the Vertical Flight Society (VFS) has had an expansive view of how to advance vertical flight. We didn’t just focus on the unique aspects of helicopters (e.g., rotors) but all of the technologies, methodologies and disciplines that supported the development of vertical takeoff and landing (VTOL) aircraft. Important systems like engines, lightweight structures and controls are applicable to all aircraft, but most critical to powered lift.

With VFS leading electric VTOL activities for nearly a decade, the Society has similarly embraced supporting technologies and approaches that are broadly applicable across electric aviation, but remain most focused on VTOL-specific challenges.

Electric Flight
With the successful conclusion of the Society’s Igor I. Sikorsky Human Powered Helicopter (HPH) Competition — won in June 2013 by the Aerovelo team in Toronto — VFS began considering potential follow-on competitions. Mark Moore, then working on electric fixed-wing aircraft and personal VTOL at NASA Langley, urged VFS to consider a competition leveraging electric propulsion advances. Although this was not pursued, these conversations set things in motion.

In August 2014, VFS held the world’s first conference on electric VTOL. The “Transformative Vertical Flight Concepts Joint Workshop on Enabling New Flight Concepts through Novel Propulsion and Energy Architectures” (TVF) was limited by the 100-seat meeting room but many participants would go on to transform the electric VTOL industry.

The event has been held annually and soon spun out the NASA/VFS TVF Working Groups. The Uber Elevate activity, indirectly boosted by the early VFS activities and announced at the 3rd TVF Workshop, generated global interest and activity that has grown exponentially since then.

VFS is the only technical society with a dedicated eVTOL Technical Committee, which draws on the strength and expertise of our members in industry, government and academia. In addition to special sessions on eVTOL since 2016, VFS has had dedicated eVTOL technical sessions at the Forum since 2020. VFS was the first to start teaching eVTOL short courses in 2019, and we place great importance on the future vertical workforce and growing talent crisis.

This past January, the 2022 Transformative Vertical Flight meeting again sold out, as it does every year, with some 400 attendees in person (and another 200 online). The 10th Annual Electric VTOL Symposium will be held next January, in Mesa, Arizona, in conjunction with the biennial Autonomous VTOL Technical Meeting.

The term “eVTOL” was coined in late 2016, and VFS created the world’s first eVTOL newsletter, followed by the world’s first dedicated website (www.eVTOL.news) a few months later. As new concepts began to be considered that seek to leverage the transformative potential of distributed electric propulsion, VFS developed new terms — such as eCTOL and eSTOL — to describe electrically powered conventional and short takeoff and landing aircraft. Although there was initially some competition between differing aircraft architectures, VFS sought to bring everyone together to address common technologies. A frequent refrain begun several years ago was “eVTOL needs eCTOL and eCTOL needs eVTOL to be successful.”

Electric flight applications are a spectrum, with most of the technologies largely applicable whether the propellers thrust only horizontally for eCTOL, vector slightly for eSTOL, or thrust vertically for lift. In addition, the US Federal Aviation Administration (FAA) is treating any “normal category” airplane that generates wingborne lift and is not able to autorotate as a Part 23 aircraft — whether eCTOL, eSTOL or eVTOL — with the unique aspects of the vertical flight regime handled separately. While a helicopter does not look much like an airplane, electric flight aircraft may look nearly indistinguishable.

Thus, from a technology and regulatory perspective, the expertise, domain knowledge and leadership that VFS has developed since 2013 is broadly applicable to all forms of “small” electric aircraft. Much of the Society’s growth over the past decade is due to the pull from our members into eVTOL and other types of electric aircraft.

In this spirit, VFS members began partnering with the Comparative Aircraft Flight Efficiency (CAFE) Foundation in 2017 for the annual Electric Aircraft Symposium (EAS). Originally established in 2007, the EAS is the world's longest-running conference on electric aviation. Last year, VFS held the first hydrogen-electric session at EAS.

VFS has now taken over this important event in its entirety to better serve the entire eCTOL-eSTOL-eVTOL community. Yolanka Wulff has been the principal organizer of EAS for the past seven years and will continue to produce the event with VFS. This year's 16th Annual EAS returns to Oshkosh, Wisconsin, on July 23-24, as a hybrid event the weekend before the Experimental Aircraft Association’s (EAA) AirVenture 2022 (see www.vtol.org/eas).

Hydrogen Electric
Although hydrogen propulsion was discussed at the inaugural 2014 TVF Workshop — most notably by Bud Skriba — it was not considered as sufficiently mature by the attendees and not as simple as all-electric.

However, advancements in hydrogen fuel cell (HFC) technology for aviation and other industries in subsequent years resulted in discussions at the US Air Force’s Agility Prime Launch Event in April 2020. From this, VFS formed a hydrogen-electric VTOL working group, later named the H2eVTOL Council. Gathering some 200 participants in the first 18 months, the web meetings provided significant education to the VFS community, with monthly seminars to understand the state of the art of hydrogen applications and its usage relevant to aviation (see “The H2eVTOL Council's Pioneering Year,” Vertiflite, Jan/Feb 2022).

A second working group was spun out this January. The new H2-Aero Team was formed to bring hydrogen and aviation experts together with the goal of developing both a roadmap and a potential public-private partnership related towards hydrogen infrastructure and HFC aircraft demonstrations.

In March, VFS held the first conference on hydrogen-electric aircraft in North America. The 1st H2-Aero Symposium & Workshop was a huge success (see “H2-Aero: Leading the Way to Carbon-Free Aviation,” pg. 60). Like the first TVF workshop, this first hydrogen meeting sold out, limited by the 100-seat meeting room (plus more online). And like the first TVF workshop in 2014, the world may look back years from now and see an inflection point that crystalized when hydrogen for electric flight went from a fringe idea to mainstream.

Advancing Hydrogen Flight
There has been considerable progress in hydrogen fuel cell technology, primarily in the automotive sector. Cumulative HFC car sales in the US totaled 12,272 through the end of 2021, with 3,341 sold last year, according to the California Fuel Cell Partnership. Hydrogen fleet trucks and buses have been used for many years, most major automakers are developing HFC cars, and some 35,000 forklifts operate on hydrogen in the US.

Meanwhile, there is significant work in the European Union and in the United Kingdom in supporting the advancement of hydrogen for aviation. Germany’s H2FLY, for example, flew a 77-mile (125-km) cross-country flight from Stuttgart to Friedrichshafen on April 12, marking the first time a hydrogen-electric passenger aircraft has been piloted between two major airports; the aircraft set an altitude record of 7,230 ft (2,200 m) the next day. California-based ZeroAvia has been conducting HFC-powered aircraft developments in the UK for several years, and is now converting a Dornier Do 228 to fly in England later this year.

Automotive and aviation applications have been embraced primarily to reduce the amount of pollution created. However, HFC power would be a gamechanger for eVTOL: distributed electric propulsion allows novel aircraft configurations that should be safer and quieter, and can benefit from wingborne aerodynamic efficiency, but the low energy density of batteries severely limits the range, endurance and size of eVTOL aircraft. HFC-powered eVTOL designs are expected to have far greater capabilities than battery-powered aircraft.

If a rising tide lifts all boats, then the rising number of applications of hydrogen to aircraft of all types also provides lift for vertical flight. This is particularly true as there may be significantly more investment needed — and opportunity for financial gain — to retrofit current fossil-fuel-burning fixed-wing airplanes and airliners to carbon-free HFC and hydrogen-burning propulsion systems. Maturation of HFC technology for aviation (most importantly increasing efficiency and reducing the system cost, weight and volume) and scaling up of hydrogen production and distribution across the US and other countries for H2eCTOL and H2eSTOL will also support H2eVTOL and allow electric VTOL aircraft to reach their full potential.

The Way Ahead
There are many challenges to overcome, but hydrogen promises abundant, clean, sustainable energy, with water vapor as the only byproduct. Despite the pioneering work and government support in Europe, hydrogen has not been embraced for aviation in North America. Several hydrogen-electric aviation startups founded in the US (e.g., Bartini, HyPoint, Universal Hydrogen and ZeroAvia) have now expanded to the UK and EU to take advantage of more supportive governments to advance aviation applications.

Both gaseous and liquid hydrogen have been standardized for transportation applications, but not yet at scale or developed for operational use in aviation. Other impediments include the cost and environmental impact of generating hydrogen, the lack of infrastructure, the challenges of transporting hydrogen and other high costs due to the prototype nature of the industry today.

Now is the time for the US to work to bridge the gap between the automotive and aviation communities, create a broad initiative to understand the potential of HFC aircraft, and develop a roadmap to get there. Sustainability is a key plank of the Biden Administration and a stated goal for NASA, but hydrogen aircraft propulsion is not part of the NASA Aeronautics Research Mission portfolio. With much work already being done in Europe and elsewhere, NASA and the FAA should follow the trail blazed by their counterparts to decarbonize aviation.

VFS is a relatively small non-profit organization, but one that is powered by the passion and expertise of our members and partners. We didn’t expect that our TVF efforts would expand to help propel all types of electric aviation. We also didn’t expect to be out in front on hydrogen aviation in the US. It’s a bit like the tail wagging the dog.

Nevertheless, the intense energy-density needs for eVTOL can help instigate advances for all types of aircraft, and expansion of other hydrogen applications will undoubtedly enable HFC eVTOL to succeed.